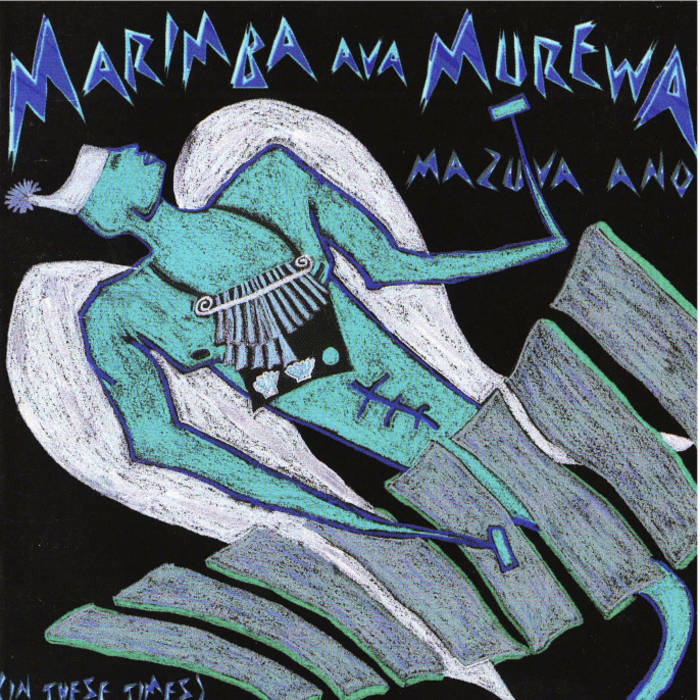 Mazuva Ano (In These Times)

All of the songs on this recording are based upon and inspired by the ancient songs of the Mbira Dzavadzimu, a sacred instrument of the Shona people of Zimbabwe.

The Mbira Dzavadzimu in its most basic form is a 21-keyed instrument that is played with the right and left thumbs as well as the right index finger. The keys are forged from various types of metals and fastened to a solid wood sound board. The entire instrument is then secured inside of a large round calabash resonator for increased sound volume.

The mbira Dzavadzimu (which is directly translated as the Mbira of the ancestors) is said to act as a key that opens the door to the spirit realms. There are well over 200 traditional songs that can be played at ceremonies to call upon the ancestors and other spirits who possess people, called svikiro, for the purpose of communicating with the living.

The music was arranged and composed for the Marimba Orchestra by combining the melodic structure of the traditional Mbira songs with central and west African rhythmical elements. To this foundation were added original lyrics, melodies, and western harmonies.


"The first time I heard Mbira music it was as a mother to her long lost child. The music cradled me in its warmth and I knew not whether I cried from joy or sadness.

It was only a few months after my ears had first drank of the Mbira that I found myself in Zimbabwe trekking over hot earth to a remote village in the Murewa tribal lands.

I was accompanying a dear friend and Mbira virtuoso named Musekiwa Chingodza. Musekiwa's father was a Mhondoro* and we were on the way to the Mhondoro's spirit house where an all-night Bira ceremony* would be held that night.

We arrived at Musekiwa's small village to find the spirit house full of young and old alike all dancing in pulsating unison to the serene voices of women that melted over the weaving rhythms of the Mbiras.

As the music beat relentlessly on, several of the Svikiro became possessed and began dancing in super-human ways.

It wasn't until much later that I heard an inhuman groan from Musekiwa's father that seemed to come from the throat of the earth. The Mhondoro had now arrived in the body of Musekiwa's father.

The dancing stopped; the Mbira players changed their song; everyone sat down and began the traditional clap in unison as the Mhondoro was dressed in long black flowing robes and headdress.

Musekiwa and I were instructed to remove our shirts. The Mhondoro, who now looked nothing like Musekiwa's father, spit water mixed with medicines all over out bodies and then began to speak. The Mhondoro spoke many things to us as the Mbiras played softly behind him, seeming to accentuate his words which he spoke until the sun rose. Some of what was said I am not permitted to repeat, and some I am supposed to.

First the Mhondoro instructed that we carry out a ceremony that would make peace and unite my ancestors with the ancestors of Zimbabwe. After this Musekiwa and iI were to form a musical group. He said our group would be a sign of the reuniting and peacemaking between the white and clack races. He told us that we would bring rain to wherever we played in Zimbabwe and that this would be a symbol of the spirits rejoicing in our union.

He predicted that our fame would spread throughout Zimbabwe and that our songs would be sung by children in the streets. My playing the Mbira and singing in Shona would be a symbol of peace and a sign of change from when the whites used to burn the Mbiras.

Finally I was told that my ancestors from forgotten European tribes were responsible for leading me to Zimbabwe. It was their wish that I learn this music. I was told I would be given dreams on how to play certain songs and that in time the music would course through the veins as my own blood did. I was also told that there would be a time when I would have to return to the people of my own country to share and spread the music to the best of my ability.

I have to be honest in saying that at the time I had a hard time believing a word that was said. Yet in the morning after the Mhondoro had exited the hut in his robes, Musekiwa and I began to play the Mbiras together. As the sun slowly rose over the earth, dark clouds began to gather over Musekiwa's small village and it began to rain, yet only on the spirit house and the land within a half-mile radius surrounding the hut in which we played. Everywhere else it remained dry and parched. At the time Zimbabwe was experiencing a serious drought and this was the first rain these people had seen in five years. All watched this peculiar rain in awed silence as Musekia and I played away on the Mbiras.

When I turned my head away from the door where the rain poured from the sky, I saw an old woman with tears running down her weather-beaten face. As she stared at Musekia and me with a smile as warm as the sun I felt ashamed, for she had more faith in our destiny than I did."
-Chris Berry, 1997

*Mhondoro - refers to the most powerful spirits and spirit mediums of Zimbabwe. The Mhondoro are believed to possess super natural powers and it is said that the Mhondoro spirits reside in the bodies of lions when not occupying their human hosts.

Chris Berry was only 13 when he began his apprenticeship with Titos Sompa, a master drummer and dancer from the Congo. At an early age Chris was set on a musical pathway that would eventually lead to the number one spot on the Zimbabwean charts. While in Zimbabwe Chris conforms to the populat culture by speaking fluent Shona and adhering to traditional Shona customs. Throughout Africa Chris is respected as a drummer, vocalist, and Mbira player and often participates at Bira ceremonies (dedicated to calling on the ancestral spirits).

All songs written, arranged and compased by the Ancestors of Zimbabwe, Njuzu Spirits of the Oceans, and Chris Berry.