Beats from the Blue

by Chris Berry and the Blue Tribe 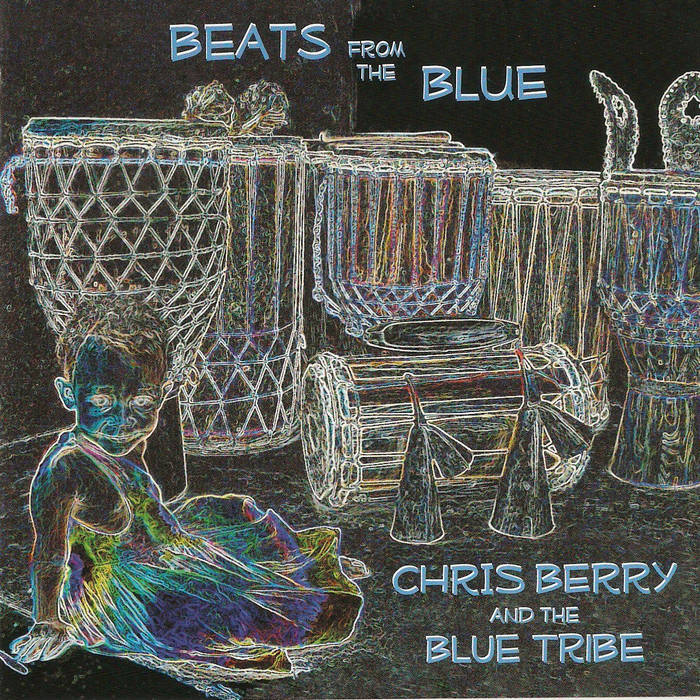 ATIO - The Blue Tribe Drum System:
Having played for the National Ballet of Mozambique, a chiefs burial ceremony in the Congo, wedding ceremonies in Mali, rumbas in Cuba, nightclubs in Ghana, and spending a quarter of my life playing for various functions and ceremonies throughout Zimbabwe, I began dreaming... I dreamed of creating a drum system that speaks many rhythmic languages. I dreamed of a drum having the slap of a djembe, the tone of a conga, the bass of a Congolese ngoma, and the varied textures of an Ewe ensemble. I dreamed of a system that can emulate bata conversations, and at the same time play rhythms a Congolese person can recognize and dance to. After many trials and errors this dream became manifest through the hands and vision of Mike Cox, who built the first ATIO ensemble. This recording commememorates the birth of this drum system - it is the first set created by Mike and the first time the ensemble has been recorded together in its entirety
--Chris Berry

Chris in the Dare of the Nuandu
It was just minutes before I was to present my first drum composition before the Dare of Nuandu (The Royal Ancestral court of Mondoro Nuandu). It was in this sacred court that the Spirits and Elders would decide if the rhythm I had dreamed had the power to call the spirits. This was not a strange occurance in Zimbabwe, as it is common for Zimbabwean musicians to bring their dreamed music before the court. What was unusual is that I am not Zimbabwean, but rather a Murungu (of European descent).
From outside we heard the ululating of the women, and the ment clapping in unison - this meant the presiding Mondoro spirit medium had taken his place and court was in session. The other drummbers and I removed our shoes, rubbed ground tobacco on our hands and in our hair, and entered the Dare. There was a definite excitement in the overcrowded Dare as we entered, and Nuandu wasted no time in getting down to business - “Well you came to play for us, so...... play.” Breaking out of the nervousness that gripped me I stood up and hit the beginning break, and the drums were off and running. I don’t know how long we played, but to me it seemed an eternity before Nuandu himself stood up, and to everyone’s astonishment began dancing. Others followed his lead, and it was not long before I was almost choking on the dust stirred up by the dancing. With a slight raise of Nuandu’s hand we stopped drumming, and everony sat down silently, with only the lingering dust as a reminder that the court had just been the scene of a frantic dance session.
As Nuandu took his seat and the elders took out their snuff containers, there was a total silence in the Dare. Suddenly Nuandu’s voice rang out across the Dare. “ Has anyone ever heard that rhythm before?” The elders whispered among themselves, and everyone else looked dumbfounded, not knowing how to answer the question. He asked the question again, and again the response was the same. “ Who among you has heard the drumming the comes from the sacred caves in Dindinyongwe Mountain, where our ancestral spirits dwell/” At this question many in the court nodded in agreement, especially the elders who had heard more drumming than the younger generation. “The rhythm that you just heard this young man play for you is that very rhythm that our ancestral spirits play in those sacred caves.” We were dismissed without another word. Later when I asked one of the elders if the rhythm had been accepted, he laughed, saying “The sweat on our brows should have been answer enough for you.”
Later I was summoned by Nuandu to sit with him in his quarters, which are in a sacred forest that only a few are allowed to enter - here we talked for hours. I can’t repeat here what he said to me, but can only say that years of self-questioning and doubt around my “inexplicable passion” for African music and my unquenchable desire to play it had been lifted.
--Chris Berry

The Drums and the Structure of the Music
The ATIO Ensemble can be divided into three components - Kushauara, Kutsinhira, and Kusanganisa. These terms come from the Shona people of Zimbabwe, and I use the concepts that they represent in all of my compositions. The names of the instruments are: Kampwinde (small hand drum), Pwinde (mid hand drum), Pwindeba (low hand drum), Mademba (low set of stick drums), Mabinda (high set of stick drums, Kagigiri (slit log), Hosho (shakers), Gindi (hi-bell), Gondo (low bell).
Kushaura is the accompaniment part that conveys the yang aspect of the rhythm. It is the foundation upon which the other accompaniments are based. It is the basic part of the pieve. The Kushauara is usually played on the Pwindeba or the Mabinda. The Kutsinhira part in contrast is the yin of the piece, balancing the kushaura. The Kushauara often marks the downbeats while the Kutsinhira plays the upbeats. The Shona describe the relationship as the Kushauara being the pliw and the Kutsinhira the seeds being dropped into the empty space the plow has created. The Kutsinhira is uaually played on the Pwinde and the Mademba. Kusanganisa literally means to weave or to mix. This part is plaed by the soloist, and it is the Kusanganisa’s job to find the spaces in the rhythm as well as take turns emphasizing all of the other accompaniments, spicing and coloring the rhythm be exposing different characteristics of the accompaniment parts.

Drum Rhythms and Songs - Composed by Chris Berry or traditional as noted, all arrangements by Chris.